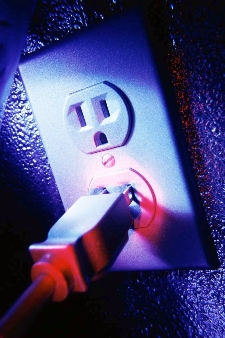 A power surge is a variation in electrical voltage. A power surge, which lasts less than 1/100th of a second, can range from five to 10 volts when you turn on your hairdryer, to thousands of volts if lightning strikes a transformer.

Large power surges, such as lightning, can instantly ruin your TV, computer and other electronics. Smaller “everyday” surges can slowly destroy your expensive electric appliances – a process called "electronic rust.”

Up to 80 percent of all power surges originate within the home – when devices with motors shut off or startup, diverting energy to and from other appliances. Common culprits of internal surges are power tools, refrigerators, printers, and hair dryers.

Is my electric company responsible for power surges?

Your electric company is responsible only for surges that occur due to negligence of our personnel. Most surges are caused by factors outside of the control of telephone, cable and electric utilities.

Your power company is not responsible for surges caused by lightning, animals, tree limbs, faulty wiring or surges created within your home. 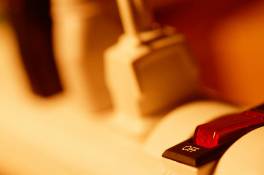 How can I protect my home electronics from power surges?

The best way to prevent damage from power surges is to invest in high-quality surge protectors. All programmable appliances should be connected to a surge protector, including home entertainment systems, computer equipment, and other digital devices.

Also remember that power surges can come into your home through other utility lines as well as electrical, so be sure to connect incoming cable and satellite TV lines, and all telephone lines, including fax and modem.

This phenomenon is known as a "power blink". It's annoying, but it's actually preventing longer power outages.

When a tree limb or other obstruction comes into contact with a power line, a circuit breaker automatically trips to prevent power from surging back into the system and causing an outage. After a fraction of a second, it will automatically reset.