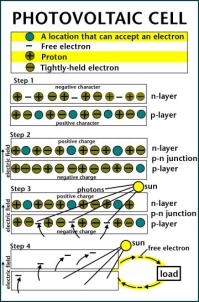 Sunlight is composed of photons, or particles of solar energy. These photons contain various amounts of energy corresponding to the different wavelengths of the solar spectrum. When photons strike a photovoltaic cell, they may be reflected, pass right through, or be absorbed. Only the absorbed photons provide energy to generate electricity. When enough sunlight (energy) is absorbed by the material (a semiconductor), electrons are dislodged from the material's atoms. Special treatment of the material surface during manufacturing makes the front surface of the cell more receptive to free electrons, so the electrons naturally migrate to the surface.

When the electrons leave their position, holes are formed. When many electrons, each carrying a negative charge, travel toward the front surface of the cell, the resulting imbalance of charge between the cell's front and back surfaces creates a voltage potential like the negative and positive terminals of a battery. When the two surfaces are connected through an external load, electricity flows.

The photovoltaic cell is the basic building block of a photovoltaic system. Individual cells can vary in size from about 1 centimeter (1/2 inch) to about 10 centimeter (4 inches) across. However, one cell only produces 1 or 2 watts, which isn't enough power for most applications. To increase power output, cells are electrically connected into a packaged weather-tight module. Modules can be further connected to form an array. The term array refers to the entire generating plant, whether it is made up of one or several thousand modules. The number of modules connected together in an array depends on the amount of power output needed.

The photovoltaic cell was discovered in 1954 by Bell Telephone researchers examining the sensitivity of a properly prepared silicon wafer to sunlight. Beginning in the late 1950s, photovoltaic cells were used to power U.S. space satellites . The success of PV in space generated commercial applications for this technology. The simplest photovoltaic systems power many of the small calculators and wrist watches used everyday. More complicated systems provide electricity to pump water, power communications equipment, and even provide electricity to our homes.

Some advantages of photovoltaic systems are:

Photovoltaic cells, like batteries, generate direct current (DC) which is generally used for small loads (electronic equipment). When DC from photovoltaic cells is used for commercial applications or sold to electric utilities using the electric grid, it must be converted to alternating current (AC) using inverters, solid state devices that convert DC power to AC.

Historically, PV has been used at remote sites to provide electricity. In the future PV arrays may be located at sites that are also connected to the electric grid enhancing the reliability of the distribution system.